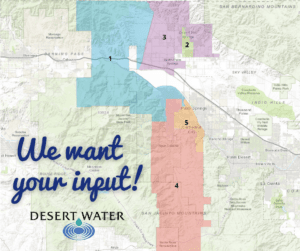 The Desert Water Agency Board of Directors invites the public to attend a public hearing during its regular board meeting starting at 8 a.m. on Tuesday, April 5. DWA staff will recommend that the Board of Directors adopt a map for use in future elections.

For information on how to attend the online meeting, go here: https://dwa.org/events/board-meeting-46/

Tuesday’s recommendation for adoption comes after significant input from the public through a variety of public hearings, workshops and e-mails.

DWA is required to redraw its Board of Directors maps based on 2020 Census data to ensure each division has about the same amount of people.

The Agency worked with demographers on several draft maps and even invited the public to create their own maps for consideration. A priority throughout the process is respecting communities of interest and keeping neighborhoods together.

In March, the Board narrowed the field of maps from nine down to two that are still in consideration. The map the Board adopts will first be used in the Nov. 2022 election – which has three division seats up for election.

DWA has five Board of Directors and five divisions. Currently, two members of our Board represent a division. President Kristin Bloomer represents Division 5 and Director Paul Ortega Represents Division 4. The other Board members represent Divisions 1, 2 and 3 at-large until after the November 2022 election. Those at-large Board members are Vice President Jim Cioffi, Secretary-Treasurer Joe Stuart and Director Pat Oygar.

Your home address (where you’re registered to vote) determines which division you fall into and which elections you are able to vote in. Under an election by division system, residents typically have a chance to vote every four years for one candidate.

For more information, to check out draft maps or to see which division you are currently in, go to www.dwa.org/divisions